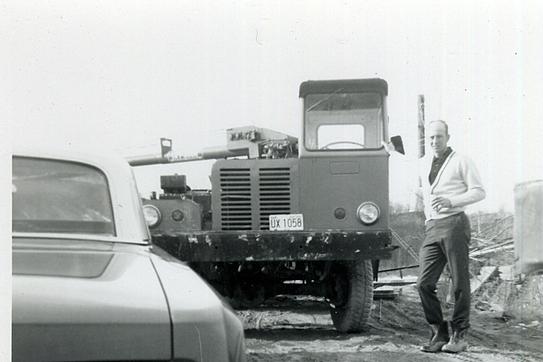 The Birth and Life of Jones Construction

With the development boom of single family homes in the 1950s came the insight to use the basement as an extension of the living space (previously considered for use as cellar or storage space). This launched builders on a search for a better basement.  Stone and mortar construction was quickly replaced with block concrete construction which produced a more consistent basement. The block basement was a vast improvement but still “something better” was strived for and found when poured concrete walls were developed.


During the mid 1950s, Charles E. Jones worked for Pile Construction of Kansas City, Missouri a poured concrete wall contractor. A time when the poured wall industry was in its infancy and Kansas City was its birthplace. The foundation industry in Milwaukee at this time belonged to the hollow concrete block contractors.


A Milwaukee developer at this time was Towne Realty; Mr. Joseph Zilber, the founder of Towne Realty, decided to pour the basement walls for his development “College Heights” located on 20th andCollege Ave in Oak Creek. He hired Pile Construction for work inMilwaukee and Charles E. Jones was one of the men sent to complete the work for Mr. Zilber’s project. Eventually Pile Construction returned to Missouri while Mr. Jones decided to stay to develop his own poured wall company in Milwaukee.


We believe Joseph Zilber was instrumental in developing the poured wall industry in Milwaukee. Prior to his decision to offer poured foundations in his new development, builders were focused on block basements. Milwaukee lacked poured wall contractors and the industry was inexperienced on the strengths of poured foundations. Also, we acknowledge that without Mr. Zilber’s interaction with Pile Construction, Mr. Jones would not have started Jones Construction Co., Inc. in Milwaukee, Wisconsin.


Charles founded Jones Construction Company in the beginning of 1957. Like most new businesses it took great effort, Jones spent much of his time proving the merits of a poured basement wall to area builders, developers and potential new home owners. Jones fought it out against the firmly rooted block foundation companies in Milwaukee. Block foundation companies falsely claimed the poured wall foundations would be colder and leak more. Jones would visit local trade shows trying to convince the public of the truth a difficult task as the only poured wall company in a “sea” of block companies.


The rest of his time was used working to build a strong and knowledgeable crew. A man on one of these crews asked to describe these times stated.

“Charlie encouraged his foreman to teach other employees how to lay out foundations. E. Hedrick taught me how to lay out foundations. Shortly after that Charlie asked me if I thought I could take a crew and put in a footing. I said yes. After that I was always a foreman. There was just no place for a lazy man working for Charlie. A lazy man would most generally last half a day or 2 to 3 at the most. As a result, most of the people who worked for Charlie were of foreman quality. Just about any man on the crew who had worked one year or more was capable of going out and running a crew himself. Charlie taught many men who have gone into business for themselves and most of them have become very successful.”
---Jason Tinker


As Charles grew his company he associated with others in the poured wall industry. Together they would discuss ways to help build their market and strengthen the industry. One such meeting took place in December of 1974 over dinner with Bob Sawyer and Larry Clark. It was during this meeting the idea for an association for poured wall contractors was conceived and by February of 1975 they had formed the “Poured Concrete Wall Contractors of America”. As one of the founding members Charles served a term of President of the association from 1979 to 1980. Today that association is known as the Concrete Foundations Association.


Mr. Jones established his business in the Milwaukee/Franklin/Oak Creek area.  Over the years he was constantly improving on the equipment and the business grew into new improved locations.


Charles' work ethic and his ability to put together a high quality crew built him a company that would become his legacy. He unexpectedly passed away in 2002 leaving Jones Construction Co., Inc. to his son Richard Jones.


Richard has made improvements in the company since his father's passing. First of all by giving the company a new location, building a new warehouse and office with plenty of space for growth.   He purchased new equipment to keep up with the demands of the customers.


Richard has a long history with Jones Construction and the industry.  He has worked full time in the family business since 1970.  He has helped "Poured Concrete Wall Contractors of America" with numerous issues. Over the years he has experienced countless  projects and worked to help customers solve difficult foundation issues.


Richard Jones has run Jones Construction since 1992, his goal is to do an exceptional job for customers by giving them the most precise high-quality foundation possible.Steel reinforced poured concrete walls offer performance that hollow block walls
simply cannot match.